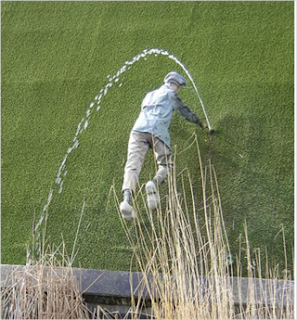 I quote Riley's opening paragraph only to encourage you to go read the rest. As is usually the case, Riley is absolutely correct in his appraisal of not only the current miniscule victory being over-celebrated in the mountain of conceit residing just north of NC, but in the terrible failure of a majority of people of common sense and good will to stop, over some forty years, a ruthless and misguided minority from trampling a woman's basic right to own her own body and health in the United States:

OKAY, so, far be it from me to fart in the crowded elevator of delirious triumphalism rising amidst a temporary 5% reduction in the level of anti-abortion insanity in this country, but someone really should point out how defenders of reproductive freedom lost this battle four decades ago, how they continue to lose it today, and that celebrating small victories only makes sense if you're a ragtag band of insurgents or a hapless sports franchise.

In this regard, I also hope you saw Ms Maddow this week on the historical record of the current Governor of Virginia. The Governor, who has for obviously craven political reasons backed away--for the moment--from the "state rape" law he himself encouraged and probably ghost wrote, acting as though he only became just now aware of what the law required, has a history of doing this same pirouette whenever he feels it to be politically required. In fact, the Governor is as much of a fundamentalist fascist as Rick Santorum. He's written serious theoretical essays on the subject of using the power of the state to coerce behaviors the state views (in his view of course) as more acceptable than other behaviors. His treatise is I'm sure available on line, and as Ms Maddow pointed out, he didn't write it as some 20-year-old grad student, but as a 30-something adult embarking on a political career from the base of Regent University, the protege of Pat Robertson--religious fascist non parallel. As the Governor is, so to speak, "running" for Republican Vice President, his views have deep significance not only for those folks who find themselves living in the Commonwealth of Virginia, but for the rest of us as well. In my opinion, all the evidence points to a man who has rock solid beliefs, and who thinks that the beliefs are far too important to reveal to the voters before an election. In this he stands with several current Republican Governors, most obviously Scott Walker.

He also stands with the fundamental Republican operational tenant--that the practice of democracy is a fools errand, and that it's best to say whatever seems necessary to win votes, without regard to either personal belief, or general truth. This strategy is clearly in operation with both Mr. Romney and Mr. Gingrich. Santorum tends to go the two of them one better, asserting and then taking back audacious positions on the same day if necessary (see, e.g., his assertion this weekend that "going to college" is some sort of "elitist" goal aimed at "remaking your kids" in the image of Obama). As Michael Steele put it to Chris Matthews last fall, "he's not lying, he's talking to the base."

Riley's right. The current events in Virginia are not a victory, except in the most narrow sense. At the moment, only a small hole in a big sieve has been plugged. Even in this small victory, Virginia is still aiming to mandate a medical procedure--an external ultrasound--whether the patient and her doctor agree it is medically necessary or not. Thus, the center shifts ever rightwards.
Posted by Fiddlin Bill at 9:16 AM