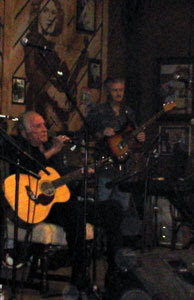 Johnny Cash died in September of 2003. He was much larger than a single genre, a member of the Rock and Roll Hall of Fame and the youngest inductee of the Country Music Hall of Fame when he was given that award at the age of 48, in 1980. His wife and musical partner, June Carter Cash, died in May. Though he was suffering from diabetes and a Parkinson’s-like nerve disorder, the loss of June may have been the final blow from which he never recovered.

I witnessed his last show, a June 21st performance at the Carter Fold, in Hiltons, VA. I was there to play with Craver, Watson and Newberry, and Johnny simply announced that he wanted to come sing for June’s people, and that he did. Word had preceded him, and cars were parked for miles up and down the little two lane country road that serves the Carter Fold. It was estimated that there were some 1200 people in attendance—about 500 more than capacity. They sat out on the hillside behind and on each side of the building, looking in at the stage from the open wall/windows.

Johnny could barely walk, and was helped to a chair front and center, the big framed pictures of the Carter Family behind him on the wall. He played for about 45 minutes—many of the great old hits: Ring of Fire, I Walk the Line, Folsum Prison, and some lovely old hymns and ballads. When he left, Dale Jett, Janette Carter’s son and the MC of the evening, asked that people please give him room and not ask for autographs, that he was very tired and ill. He was unable to walk up or down the back steps into the dressing room, and so entered and left through the audience.

He had done a great deal to get the Carter Fold going through the years, with many appearances at the Fold Festival that no doubt improved the draw enormously, and helped Janette build the venue into the old-time music institution it is today. It is little remembered now, but in 1969 Johnny Cash outsold even the Beatles. He will not be replaced in the galaxy of music.