You're Doing a Heck of a Job, Brownie 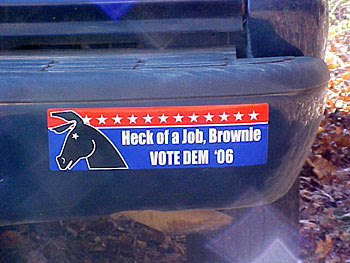 The Empty Suit problem we face as a country is not readily apparent during elections. It is nonetheless a deep and dangerous problem, and probably as much for the GOP, who have been engaging this strategy for decades, as for all of us who live at the mercy of those who hold the reins of power.

Understanding the temptation itself is easy enough. The GOP festered for decades as a minority party, in power but not quite with power, endless coitus interruptus, which for the powerful, the power hungry, builds into a repressed rage. Something must be done! Anything. It is clear that elites have goals which are frequently not embraced by the voting public. Why not, then, operate under a cloak of misdirection, when you absolutely know you're right but can't convince anyone else outside your comfy den, in front of the roaring fire, the tingle of fine single malt on your pallet.

Of course the public doesn't want to send its children to be ground into hamburger in the modern machine of war. Many of us have a kid or two, these very special people we've nurtured, raised, encouraged, sacrificed for, loved. If the kids have managed to evade, avoid, or overcome all the normal peacetime pitfalls of American life--drugs, early pregnancy, car wrecks, suicide, stupid school systems--who would then send them into the carnage, even knowing for certain (and nothing is certain) that no bullet or shrapnel will find them, that they will come home at least physically whole? It would take a threat to all of us so dire that it cannot be ignored. It would take a bigger fear to trump the parental fear, a Pearl Harbor, or planes crashing into the biggest buildings we possess, the visual symbols of the country.

But this is many steps away, way off in the future. The first step down this road is to find an empty suit, a charming, friendly guy, fatherly in all the easy ways, warm, a guy who watches NFL and finds big wordy boring discussions boring, a guy with a twang just like the airline pilots we trust with our lives, and a tousled head, and a little crinkled around the far away blue eyes. This guy might be a pretty nice guy, because he has a lot of money and pretty much lives exactly how he wants to live. He has never looked in the mirror except to comb his hair, and when "those feelings" come up in the deep night, as they do, he has learned to focus, to return to the routine, to "do something constructive" like chopping wood or riding his bike (when he used to go open that bottle of Jack). Life is clean and simple for this nice father-knows-best, and as he doesn't want to be thinking of world strategy, of the vast future before the country, the next 100 years, when oil really does get scarce, when the polar ice caps really do mostly melt away and the world climate destroys whole countries of mostly brown, and very poor folks, well he doesn't have to think about that. Because his job description is: privately of course--he's an electric switch.

That's right. The Empty Suit President of the United States is a simple bipole electric switch: on/off, go/nogo, a 1 or a zero. His "job" is to make the choice, to say "go" or "stop." It is not his job to understand what the hell is this electricity anyway, that surges through him instantly, that can nuke a TV dinner or a city in Japan. And therefore he doesn't even have any responsibility for what the electricity does, where it goes. His job is to be the person who is the decision-maker. And to go out to the people who are affected and stroke them some. The responsibility lies elsewhere, with the men and women who are sitting in their dens in Falls Church, sipping their single malts, watching the fire, enjoying the pretty Christmas tree and the soft snow falling outside their windows while they understand the big problems and work out the big solutions.

But there is now a new problem for the brilliant thinkers. Things have not gone as they planned. The manipulations worked ok, the Empty Suit has done all that was asked of him, and if he becomes petulant on occasion, that was only predictable and the idea was always to keep him occupied and never let him feel responsibility. Some empty suits are easier to distract than others, all have their problems, just different ones. Because this one scores so high in the area of "reformation" (unlike our last President, who distracted himself with whatever he wanted and was therefore not really an empty suit, but perhaps like JFK a too loose cannon, assassinated more or less by a honey trap rather than the old fashioned way), his distractibility is limited. But his job requires things, sometimes, that it was known in advance that he cannot do.

The first empty suit problem was 9/11. That was predictable, and therefore the President was not available to deal with the events. Mr. Bush sat in his school desk, in Florida, which was the absolutely perfect place for him to be. Then he was shuttled around the country while the real thinkers and doers were engaged in the immediate and longer term implications of the event. By the time he was back in Washington, his job had become simply the switch, and the Iraq war had mostly been planned.

But although the handlers and planners were confident that they could create their own realities, it has turned out that they aren't really able to do this. Yes, they can hand pick audiences for our Empty Suit. In such a setting he can respond to questions, give fine speeches, be all he can be. But when he has to go deal with something from the bigger world, the Real World, he cannot cope. This is predictable, was predictable. Katrina, Cindy Sheehan, Harriet Miers, a summit of Hemispheric leaders in Argentina, perhaps today a new and unexpected front in, huh?? Jordan--the world spins away from him, the balls on the table exert a will of their own, the cueball scratches. He can't always have a wire up the back of his coat.

Just as the handlers and planners didn't foresee the particular outcome that is evolving in Iraq, they didn't foresee the downside of the Empty Suit strategy. For what happens when the switch is broken, when there is no one at the top to truly lead. Many of the planners have already slipped silently away, to nice new jobs, to retirement and travel, to bemedaled speaking tours and board memberships and private business interests. Some are now indicted, or wondering if they will be indicted, as the nearly invisible wires turn out to show in just the right light.

It would be nice, wouldn't it, if this new reality we currently face--the rudderless ship of state only one quarter into a new voyage, but with no ability to return to port and start again--could at least prove to be instructive to the planners and shakers, the brilliant thoughtful men and women who see so deeply into the voyage ahead. The temptation of the Empty Suit is to be avoided. Other temptations might in this woeful light be considered as well: the temptation to make taxation into a campaign issue even when it is blatantly contradictory to argue that governing is possible without taxation; the temptation to scapegoat groups of citizens (Jews, blacks, gays, women, illegal immigrants, teens, the elderly, the poor...); the temptation to hypocritically pillory private vice; the temptation of the optional war, the quick shortcut to the elimination of other states and leaders who prove intractable to our desires.

No one knows everything. No group knows everything. It's not that simple. Do you want your pretty daughters, whom you have loved and lectured, who are just young kids who like to party and dance and see through your facade of probity, to get their arms and legs blown off in an optional war grounded in long term theoretical planning concerning pipeline routes and proven energy reserves? Or how about if they come home physically whole but psychologically ruined?

We could all see that George W. Bush was an empty suit. We should also see, and remember, that the people who used him as bait in a deeply important election could also see that he was an empty suit. (These same people, of course, thwarted the true will of the voters in his first election, and seem to have done the same in the second election--yet another example of short term hubris overcoming long-term common sense. It is only the fear in the mainstream media which prevents the public from becoming aware of this. What would happen if we all understood, for a change, just how rudderless we really are right now?) What would happen if we realize that we are actually skating on thin air? The ice was gone long ago.

It may be, of course, that old Plato was right, and that a democracy tends, in its essential nature, towards either anarchy or totalitarianism. Perhaps I am hoping for a philosopher king, a highly unlikely occurrence. It is said that the Roman Senate went on passing laws and proclamations long after the real power lay in the hands of the Emperors, and that these fine senators were able to forget, except in the deep dead of night perhaps, that they were empty suits. Still, there is much in the realm of degrees. If we have another election--one is scheduled for '06--let's hope we have some real people in those fine suits and red ties.