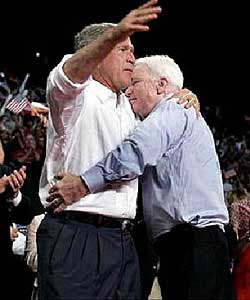 From the March 13, '06 New Yorker, in an article, "Political Science," by Michael Specter:

"Despite the official silence, the Bush Administration has been relentless in its opposition to any drug, vaccine, or initiative that could be interpreted as lessening the risks associated with premarital sex."

In the same article one Reginald Finger, former medical advisor to Focus on the Family, is quoted as having reservations about a potential HIV cure for the same insane reason--if we cured HIV the kids would have more sex. This sick, confused minority of Americans is now, apparently, making fundamental decisions that affect the health of your children. Personally, in my book a parent who would rather have his child run a preventable risk of AIDS or cervical cancer in order to coerce him or her into not having sex should have that child removed to foster care. These people need deep, long-term counseling. They need to come to grips with the fears, no doubt instilled in them as children by their own warped, fearful parents, that are driving them to make decisions that are deeply delusional, as well as evil, cruel, hateful, unloving. You pick the adjective that applies. Some of their leaders--father figures who fill the sick need for an oppressive paternal figure that their own fathers have mostly vacated with age and death--ought to be exposed as the charlatans they really are, the poseurs raking in the cash and preening in the power to influence a weak, deluded President who apparently imagines that a coming Armageddon relieves him of the need to consider the negative aspects of his decisions. But of course that would demand a press we no longer have as a country, aside from tiny pockets of reality like the New Yorker. Nonetheless, this is the relationship that is driving the health policy decisions of this country today. Men like James Dobson, Jerry Falwell, and Pat Robertson stand in, in the minds of their sad, defeated "flocks," for the oppressive parents they never saw for what they really were--small, afraid people who didn't really know much about the life they were bringing their children into.

Our President, in short, supports policies that make it more likely for your daughters to contract cervical cancer, a cancer that is silent and frequently kills before it is even discovered. We have indeed come a very long way down a muddy, slippery slope.

You will note, in the illustration that begins this commentary, that the leading contender for the GOP nomination in 2008, John McCain, is actually hugging our Dear Leader. People often say things like "well, at least he's had some real life experience," "at least he really served in Vietnam," or even "well, I'd vote for McCain if the Democrats can't find anyone better than Kerry." Mr. McCain is the third most conservative Senator by vote analysis. Mr. McCain supports this Administration and its policy to allow your daughter to contract cervical cancer if she makes the mistake of having premarital sex. (And, by the way, who the hell says it is a mistake, as a general rule, to have premarital sex?) He was also willing to give Mr. Bush this big hug after Mr. Bush slashed and slandered him to defeat in the 2000 South Carolina primary.

It is time to get real, to face the simple logic that this picture depicts. There are no Republicans to whom we should entrust this nation's government. Perhaps there's room for some of them in Congress, for balance, but I'll tell you, as a constituent of two Republican Senators myself, they ain't done nothing for me or for my state. One of 'em doesn't even live here at all. Those folks who still sit on the fence, who still think maybe McCain is some kind of compromise--Mr. Kerry, we may recall, actually offered McCain the Veep slot in the summer of '04--had better think about these policies and then look at that picture. This is real stuff, folks. I happen to have a daughter myself. We do not want to have sick, confused people behind the wheel of this huge juggernaut we call the United States of America. We have seen the results for six years now. Look at that picture one more time. Seeing is believing.

--Bill Hicks
(The image is from firedoglake.com)