Which Digit Do You Prefer, Sir! 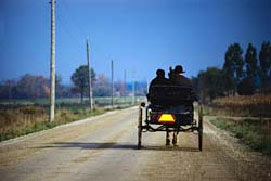 I know you can say that the coming digital revolution with our teevees is sorta like the coming of the automobile with our formerly four sure-footed mode of transportation. You can sneer, “What about the buggy-whip industry?” You can even talk about how wonderful the new high-def clarity is, although I don’t really know how wonderful it’s going to be to actually see what these talking heads really look like—sheesh, Lehrer, what happened to the guy, he’s suddenly 85 years old, and Fred Thompson, cripes, he’s 107 at least, glad we aren’t going to elect him!

But when the automobile came down the rutted path making its gawdawful racket, there was nobody running the PR machine in its train, was there? I mean the car wasn’t, at the outset, actually marketed, was it? It was more that people just said hey, I don’t have to feed that thing when it’s not running, and it doesn’t shit or kick you in the head, and it was only after a few years, when there were different car companies and all, that people started actually selling. I mean, I think that’s the way it went back then? The automobile sold itself, so to speak, and nobody knew anything about global warming; they barely knew the Earth was orbiting the Sun and not vice-versa.

We’re being sold on digital. Think about this. We had this rather nice, in place system of mass communication and entertainment, that was free and came into the house without special wires or dishes, or tiered plans, each costing $20 more than the next lower, all of it with an initial installation cost, possibly waived if you keep the contract for two years and sell your daughter to the Shiek of Araby.

Are you aware you are being sold? I’m just asking? I don’t think there’s anything to do about it at this point. In a year plus a couple of months, millions of people are going to turn on the old teevee and it won’t work, and they’ll go “what the hell?” and some of ‘em will get really pissed off, and they’ll mostly eventually go get a cheap set at Walmart, or a fancier set at Walmart. It’ll work out. They set the date the day after the Super Bowl precisely because they didn’t want people to actually burn the cities down. Nothing on on a Monday but Antique Road Show. Let’s just go by a fucking new teevee, Harriet. We can put it on the card.

But are you aware you are being sold? I went to Walmart yesterday and there was a 60 foot display of wide screen flat panel teevees all running an infomercial about how to mount them on your wall for maximum effect, and how incredible the new high-def picture was, and waaaaay down at the far dark end, some boxes with “digital ready” teevees that look like the one I have in the kitchen, 13” screens, plus a DVD player built in, for about $120. But the main deal was $350 to a $K, and this is Walmart. Gawd knows what it’s like over in the big city, at Circuit City or Best Buy. In 1967 you could buy a dang car for $2000, brand new!

Yes, the government is going to give each of us a couple of vouchers worth about $40 each to buy a box that will translate the new digital signals to analog for your old teevee, if you just don’t want to get with the program. It’s something like a billion and a half all totaled, which is what? a couple of days of Iraq meat grinding. But it’s our money, being spent by the government via our hot little hands passing it on to the companies that make those boxes. In China I’m guessing. I mean, we can’t just take the voucher and buy beer and smokes, right?

So why is it the government—our government, allegedly—just took away this pretty great free broadcast system that our free market just evolved for us to enjoy, for free—and substituted this new deal that we have to pay a lot of money to use??? I mean this is just the start, you realize? Seems to me the whole raison d’etre for local teevee stations is pretty much melting away here. All we need is the USA Today equivalent and we’ll be entirely cabled and satillitized, everybody paying monthly (no problem, we’ll just take it out of your credit card) for what had been, oh thank you Jesus for the Unseen Hand, FREE. You have noticed, haven’t you, that there’s nothing on the local news any more but the weather?

Well I guess I have a theory, but it’s just a theory mind you. It’s because the businesses that subsidize our representative government by paying for their fun little in house tournament called The Election want us to start paying for teevee and not getting it FREE. This way, they can make the ad money, and then make the subscription money, and the new gear money as well. Yeeeehaw, ain’t the Unseen Hand a damn good thing that Jesus made for us on the 12th Day of Christmas, right after He turned on the lights and parted the waters and all that. And oh, right, made Eve.

My Eve, Libby, has been noticing all this stuff, by the way, and points it out to me while I’m sitting on the couch watching NFL (for free). She also noticed this big guilt trip thing they’re doing now, about spending ….. gasp…. cash at the store. Have you noticed that? The customer is pulling out a $20, or writing a check (this is between quarters and possession changes), and suddenly everything stops like maybe he or she just shit in his or her pants, and it arrrgghhhhhhhh smells. Boy oh boy that’s a baaaad thing there, to be pulling out cash like that and fucking up the whole economy. It’s as bad as the other shaming thing where the pretty Airline Attendant is primping up in the, oh gawd in heaven, it’s the …. Men’s Room! Cash = BAD. Credit cards = GOOOOOOOD.

The deal with that is that the government probably kicks its collective ass all the way down Pennsylvania Avenue every live long day for starting things off in the first place with something anonymous, namely, cash, as the lubricative force in the economy. Because cash really messes up the process of taxation, adding at the very least a huge amount of otherwise unnecessary overhead in the form of complex surveillance and analysis of spending behaviors, which otherwise the credit card folks would be record-keeping to beat the band for anyways. But of course cash is older than taxes, or at least income taxes.

So your choice, digitally speaking, is a new “Fair Tax” under the Christian Candidate, Mike Huckabee (call this the Forefinger Plan), or a slow incremental shift, already occurring, to an all plastic transaction model (the Middle Finger Plan favored by most candidates at this stage in our democratic evolution), said model being nudged along by a constant but unpredictably occurring (and therefore proven most effective) light twinge of shaming brought to you, digitally, by your credit card industry. And after Feb 17 of ’09, as the first new national Event of the New Presidency that will indeed come next year, this new digital penetration will be complete—high def, high colonic. Poor Democrats.

“Ouch,” or “Ahhhhhh”, sir? Or you could just let the teevee go dark, and start paying cash and looking out the window, thinking outside the box so to speak. Now that would scare the bejesus out of ‘em. Not that they don’t have some more cards hiding behind their diamond cufflinks. Like you do get the precedent don’t you? Cancel a whole technology, or shape it to your larger designs? The slogan was already enunciated by some dick in the Bush Administration, remember: “Reality, we make reality.” Shoes, we don’t need no stinking shoes. So here’s another bit of technology that might need shaping: let’s solve the gun proliferation problem the US has by, voila, changing the calibers! Except this time we don’t give out vouchers, just coupons for Budweiser and Marlboros. Hey, works for me, dude.

See, and you thought I was some Commie Liberul. Merry Christmas, and keep your powder dry.