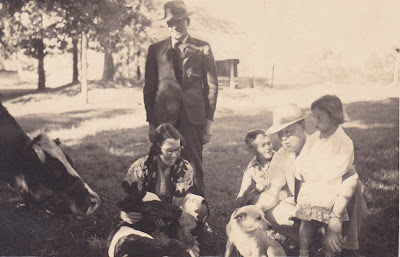 We were going through some old family photographs. Part of the larger effort to liberate the upstairs bedroom from it's current plight as a storage area. I still remember when we slept up there, and the neat little fireplace that sits in the north gable wall, unused except for the odd bat or flying squirrel that ventures down that interesting hole from the roof, only to find cats waiting for a bit of fun. There were quite a number of photos I should scan. This one, however, was different. It spoke to me like a high hard fast one, or an oncoming car in an oncoming curve, in my lane.

Where did this amazing photo come from. Who took it? The composition is remarkable, and I don't think there's another photograph in all the family photos--thousands of them surely, since these days we take photos at the drop of a hat--that has this sort of content. The cow on the left is the family milk cow, for this was the end of the days of the farm as a family sustaining place rather than a business that produced some money for going to the store, buying gas, paying taxes. I milked that cow once or twice, sitting beside my aunt, who sits next to the cow with her calf in her lap. Aunt Jenny (or possibly it was grandmother Ora) showed me how to milk. I wasn't much good at it, but I think I did get a stream going into the white, porcelained pail. I'm thinking maybe in the end momma kicked the pail over, and Jenny took the job over. I do know Ora showed me, probably around this time, the way to butcher a fresh chicken, cutting open the craw, showing me the recently eaten corn, then tossing the corn back out into the side yard for the ranging chickens to eat yet again. This is just how birds eat, the mechanics of it. The grain is not chewed for they have no teeth.

Behind Jenny and the two cows is my grandfather, James Thomas. He was born on that farm around 1867. His father Dr. William Hicks completed building the T-style farm house in 1872. This was of course just after the Civil War. Dr. Hicks had been in the war, as a doctor. He tried to save lives. After the war he built the farm house. He'd been born in another house on the place. It was a pretty big tobacco farm. There were slaves, and slave graves. The old system, after the war, was readjusted. Black people did much of the farming as share-croppers. They got a place to live and could grow their food. A "hand," according to Jenny, made $10 a month when she was a child. My dad and Jenny and the other children were tended by a black "mammy" when they were small. She was the wife of a share-cropper. Jenny spoke frequently of her, and how much they loved her. Her framed picture was displayed on a shelf in the farm house.

My great-grandfather William had a doctor's office in the parlor of the house, but eventually, by the time James Thomas got into his late teens, times got better. James Thomas went to NC State in Raleigh to study scientific farming. Perhaps even before college he'd learned to play the fiddle. I ended up with that instrument after he died. When James Thomas returned from his studies he took over the farm, married, settled into the farm house his dad had build. Dr. William moved into Durham with another son and established medical practice there. My dad grew up on the farm. He taught himself to drive when he was 12 years old. Later he flew biplanes in the Army Air Force, but was just barely too young to go to Europe and get shot down. He attended NC State as well, studied engineering, then went on to graduate school where he took a Masters in Divinity. He then came back to State, in Raleigh, coached wrestling, taught marriage and family living, founded the Philosophy and Religion Department at what was then an entirely technical college after arguing successfully to the higher ups that even engineers and architects needed some grounding in the so-called humanities and liberal arts.

In the photo he's kneeling, with me on one side and my sis on the other. He's about 49 years old, a strong, powerful man in his prime. Look at his arms. Behind us is the old barn. They kept the cow in there, and a mule or two. There was another mule barn down a path and up a hill to where there were also tobacco curing barns, a pack house, and two tenant houses. One day about this time someone put me on a mule's back. I knew nothing of mules and riding. When the mule, who's name was Rhody I think, realized he was in the charge of a duffer, he decided to go back to the barn up that hill. I pulled back on the rope rein and said "whoa." Rhody laughed and kept going until my Dad walked over and turned his head. Rhody knew immediately he was still under control, and stopped. I was plucked off his back. My sister watched all this and in a very few years was riding jumping horses in hunts, and winning prizes in rings. She's always "gotten" animals, and these days trains Staffordshire Terriers and wins agility trials. In earlier years she did the same with Rotweillers, brilliant animals who need training of the sort she can give them. Notice how she's looking at those cows.

The white dog was a fixture on the farm. I'm thinking his name was Skip. There are other pictures that include him. He was a sweet dog who ran free. We'd give him bits of chicken under the Sunday dinner table. The road by the farm, called Fish Dam Road when it was dirt, but changed to Mineral Springs Road and paved a few years after the photo was taken, took him. I was shocked that he had been caught unawares by some car. It was very sad. Sis says it was probably a second car following closely on the first, which Skip didn't see--he was good with the road. Jenny had other pet dogs, always Great Danes, all named "Daney." They stayed behind a big white fence on her little place which was across the road from the farm house, a converted tenant house she lived in with her husband Junius Beard. She taught primary school up the road. Junius was a teller at a Durham bank, until one day the bank decided to get rid of the men tellers and hire only young women for the job, at a lower salary. This corporate decision broke Junius's spirit for a time, although he eventually recovered. I understood little of this, from the distance of Raleigh and my childhood perceptions.

My grandfather James Thomas died in 1953. He was 86 years old. My dad died twenty years later, in '73, age 72. He'd been a life-long smoker. James Thomas never smoked, though he did chew and grew the weed, and annoyed my mother by spitting tobacco juice on the floor boards of our automobile. James Thomas was very taciturn, which you can perhaps see even in the photo. His most notable remark was his never changing Sunday dinner blessing. "Thank God for Dinner." I probably remembered that blessing when I was attracted to learning Tommy Jarrell's "John Brown's Dream" in 1970 or so, when I was learning so much about fiddling from Mr Jarrell, who was the same age as my dad. "Soon be time, soon be time, soon be time to sit and eat again."

I find the current ads featuring "the settlers" obnoxious. It makes fun of real life, of survival. I remember people plowing small garden plots with horses and mules in various NC towns when I was growing up. It is nearly as obnoxious as our current political cavalcade. Mrs. Clinton needs, and quickly, to quell her desperation. She will otherwise lose the nomination to Mr. Sanders, or worse, lose the general election to someone (take your pick) who has no conception at all of what is at stake. As has been said and many times, the Republicans can never run on what they stand for. The bright young people who are making "the settlers" ads will probably decide the current election. That should send a chill down your spine.

Who took the photo at the top? There is no record. Junius Beard was a photographer at a younger time in his life. He took the following notable photo, of elephants parading in downtown Durham, around 1920: 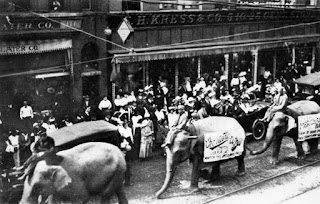 I'll leave you with another photo, which I took after Jenny died, in 1991. Someone had sorted through some of the few remaining things in the farm house, where she'd lived since the '70s. The window faces out on the field where the picture that starts this reminiscence was taken. You could see the old barn from this, the dining room window. Until the old barn was knocked down as a danger in the '80s. 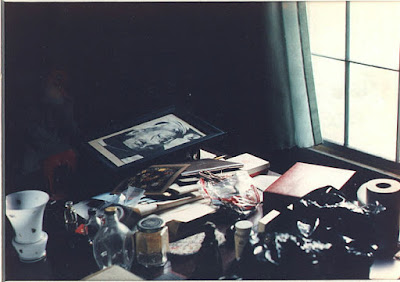 If I had to guess I'd pick Ed Massengill as the photographer, my Aunt Libby's husband, Jenny's little sister. He did take some home movies of the farm during this period of time. I never saw Junius with a camera and only found his photos much later on. Aunt Libby got me started with music. She played piano, even owning a grand piano which dominated her living room. She tried piano lessons on me, but they didn't really take, and the bass clef still looks like mirror writing. The fiddle was my instrument as it turned out. Ed sold class rings for a living, and always drove a new Oldsmobile. He had a motor boat at Kerr Lake. Later on in the '50s the family would take excursions up there for the day. By then I was listening to Elvis Presley, and calling my dad "my old man" when he wasn't around.