We got back from the Wild and Wonderful Business Opportunityland to find a decent sized red oak had removed the wires that connect our cabin to the 21st Century—the powerful hot ones that somehow didn’t start a fire in the dry leaves when their naked ends landed therein, and that’s why when we got home there was at any rate the cabin, if not the frozen food we’d left, nor lights to turn on, nor well water to flush and drink. This was of a Tuesday night, October 30, ’07, and we called Progress Energy and damn if they 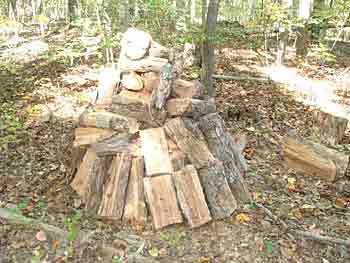 didn’t send out a big strong guy with a ladder who reattached everything in the dusk—Progress indeed--one wire still hot and brushing against his shoulder as he whittled away at the end of another so’s to make a good connection, and we discussed, him on the ladder and me standing in the doorway, the price of putting it all underground from the transformer so as not to have this situation arise yet again, maybe with attending total destruction the next time. A thing to do, and pretty soon.

The tree that took down the power line

The next day, Halloween, Libby was in bed with a banged up hand and a sore back, from the tiny fall up in West Va that she’d had at the end of an incredible hike in the boulders of Bickle’s Knob—a total out of the blue kind of deal to weirdly end a magical afternoon. I did all the accumulated laundry and hung it out, the drought still on even though there’d been a heavy rain whilst we were missing, and ate some of the Halloween candy that no one ever comes down our driveway for. The next day I sawed up the tree, and today, Friday, I just stacked it in a big round pile to dry further (tho it’s ready to burn, the tree’d been dead for probably three years, and I’d flagged it and tried to get the power company to come drop it, but they won’t do that for you although they’ll send a guy around to put the wires back on the house), after splitting it all up for the back room stove, which means mostly quarters. Red oak, god’s gift to back to the land lazy bones like myself, hell with gum and hickory, at least for the moment.

Autumn has come to central Carolina. It was up in WVa last week, turning just as we got there, leaves flying all week, and from start to finish the penultimate week for the Hillbilly Nation. A nice time to go north. Now we get to watch the re-run here, so pretty I can just sit in the kitchen and look out the French doors, watching the rustle and melancholy drift of each bit of color, the shadow of the blazing summer just gone, last of the heat that’s too hot, till next May or June or whenever it cranks back up, captured in a dead leaf, cold heat that won’t burn less you take a match to it, or a down wire. And I watch the leaves, and hope for some damn cold days, and wood fires to enjoy, and maybe even a bottle of good scotch for the fire, to sip in the late afternoon, and the crunch of snow. But it’s been milder and milder winters the last ten years or so, and nothing like the fun we had down here below the crest of the hill, sledding down the driveway with Anna when she was eight or something, heating every room with wood in those days (less rooms then, on the other hand), washing up in a twenty gallon galvanized tub by the chunk heater and hauling water in a bucket from the well just off the porch.

I’d hate to haul it now. I’m sure the water’s 100 feet down, instead of 35, like it used to be. The drought’s getting the rivers and ponds too, and all the cities and towns are freaking out and making plans for more and more strict conservation, while men who have vision and money are planning how to buy water up just like oil, and sell it back to us at their prices. Which circles back around to that fallen tree, and the thought that maybe instead of burying the power line, I ought to figure out how to pay for some photovoltaic panels and big batteries, and just snip myself and mine plumb off this here grid, ‘cept for the phone line. If we’ll just keep having some winter I can always fill up the old Ford with split oak and drive it out to the paved road, and sell it to the urbanites who want a decorative blaze for Xmas. Do enough of that and maybe I’ll get a tax break on the 35 acres that do nothing at the moment but give the deer and possum and fox and owls and the rest a place to live, including me and mine. There’s usually water in the creek, but not these days. We humans never owned a damn thing but in our minds. 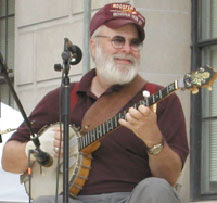 Addendum: While up in West By Gawd I ran into my old friend Dwight Diller. He has a great website about his music and philosophy, and one of the best things on there is his FAQ about the banjo. The banjo needs a FAQ, or two or three, but this one is really a very kindly and wise group of remarks on the banjo as itself and as metaphor for a well-lived life, something we all strive for and struggle mightily at. Anyone who’s got this far should by all means go read the FAQ. And after that, perhaps, consider learning that instrument that burns in your heart, before it gets too late.

Here’s a brief sample of Dwight on the banjo, from the FAQ (now go read the rest yourself, and get one of his CDs too):

Q: Do you have any opinions about banjo inlays?

A: The fancy fingerboard inlay adds nothing to the playing. Side dots do because they show you where the fret you are reaching for is located. If you want inlay, go for it. But is it worth the extra expense? It is mostly for the folks that are watching. Or when you sit around and handle the banjo yourself and dream about being one of the really all time greats. You can't see the fingerboard when you play. One inlay that I prefer is from a 'pen & ink & pastel' that Elaine Diller drew and Jeff uses his version of it for peghead inlay. Comes in 4 or 5 pieces of different colored pearl and abalone. That one I am partial to. I prefer clean finger board and side dots. Anything else is fluff and a waste. Remember, you asked.