We're glimpsing the divide
These Christmas days of '05
Watching children freeze to death
In Pakistan, where their world collapsed
Just like the Anasazi, I imagine
Watching the Colorado trickle mud, and
Climbing out a long goodbye to their beautiful
Rocks. The criminal agriculture
As tempting as the nicest deep sweet hit,
Foots poetry and music and all art
If not pure love itself--that would be too cruel.

And the fearful tribal leader on the screen
Hands jerking, makes his case for what he does
Protecting us all from some barbarian's suicide attack
By sprinkles of bitter secret indiscretions:
Better some Arabian pain, or yours, than
Some jerked on blue dress, to come down to it.

And all for a bit more time, to sing a song
To poetize or watch the NFL or buy a new doodah
While the Yankee Dollah still has
Meaning. Because the polar bears are
Drowning even as we natter on and on,
As brave as Himalayan children with their feet in rags.
Yet have you noticed that the apples
Are as beautiful as they have ever been.
How is it possible? Only whisper that seditious question
As we are informed: they listen. 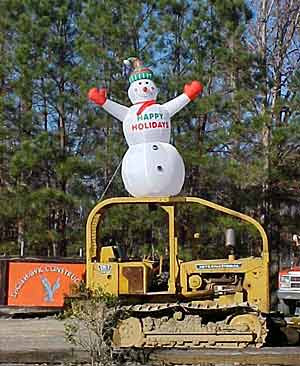 It's no wonder the Administration wanders lost in the desert as this world creaks towards 2006, when the guy who's third in line to be President, the Right Honorable Denny Hastert, R of Illinois, has made a stand about calling this year's Capitol tree a by gawd Christmas Tree rather than, say, a Holiday Tree, or whatever else people might decide to call the poor dead sacrifice to the gods of winter. Hey, I'm fine with "Christmas Tree." Libby and I are going out to the old pasture this week, and I'll crank the Poulan up and saw down a little seven foot cedar, just like we did last year. Then we'll get out the lights and the stand and the shiny balls and stuff and decorate her up, and put some presents underneath, and sit by the wood stove and sip some scotch and some eggnog. We'll also watch some football, and some videos, go to Jim Watson's Cave Christmas show (20th year I think it is Watson has played this gig), drive over to see the folks, look at Orion the Hunter climb up over the horizon from the East. It's a Christmas Tree to us. We live in the woods, and I'll even go out and put some Christmas balls on the trees here and there, where you might spot them driving down the driveway. Last year I started decorating the pole where we had a mailbox till the kids knocked the box off with a bat or something one too many times. Now it's just the pole with our number on it. So we have a Christmas Tree and a Christmas woods and a Christmas Pole.

I just don't get what the big deal is with all this hullabaloo about how there's some sort of "liberal attack" on Christmas. Is this a religious worry? It sounds like it. It sounds like another one of these deals like the "homosexual agenda's attack on marriage" which is just confounding groups like Focus on the Family and our President. Forget that a marriage is a very singular thing, and that what someone else does with theirs doesn't affect in the least what Libby and I do with ours. It's also a bit like the Prayer in the Schools deal. No one has banned prayer in the schools. Anyone can pray anytime they want. I hope they do. So fine if Denny Hastert passes a resolution that the big dead tree out there in the rotunda is a Christmas Tree. We already knew that. It's also a Holiday Tree. Christmas is a holiday after all. Some people go to work on holidays, by the way. That's the deal with holidays, you can't make someone have a holiday, because then it wouldn't exactly be a holiday would it?

And on the other hand, there ain't no Christmas Tree in the Bible, nowhere. Also, Jesus wasn't born on December 25th. The early Christians were living in a world where there were plenty of religious holidays and celebrations, and they thought that on the one hand, if they celebrated what they wanted to celebrate on some of these same existing holidays, well maybe people who thought they were a pain might just not notice them and leave them alone. And on the other hand, they also thought that if they mixed some of the old religion in with their new religion, well maybe some of the other folks might join up with them.

So for example, when the Norse people sacrificed an evergreen tree every year to the god of winter, a kind of gift to insure that spring would eventually come again, well that looked good to the Christians and so they started putting up trees in their huts too. And maybe they figured a little insurance with the god of winter might actually help too. Couldn't hurt, could it?

So now it's a Christmas Tree. There's the other thing people say too--that the gift deal, that paroxysm of spending we go through every year (the present Walmart is eagerly awaiting)--these gifts all symbolize the gift humanity got in Jesus. "God so loved the world that he gave his only begotten son..." And the Wise Men did bring gifts, didn't they? Maybe the crucifixion is symbolized in the sacrifice of each tree, except when you start talking about "symbolizing" aren't you getting away from the other thing about these right wing worriers, which is their dogma of literalism in all things biblical? I mean I like the poetry of the biblical dialectic: we start off in the way early mythic days with Abraham almost sacrificing his son, then we expand that idea to where Father God actually does sacrifice his son, and finally we come to the present moment, where we all symbolically sacrifice trees. And then spring comes again! The Jehovah's Witnesses, on the other hand, just watch all this sparkly stuff and shake their heads and do not participate. It might piss Walmart off, but there's some real integrity in that, and they're not getting on me for having a Christmas Pole.

These days we're all seeing ads for some mighty big gifts. I'm thinking of the pretty silver cars with gigantic ribbons on them, or the red tag guy turned into a ribbon. Maybe we're still trying to insure that the sun will come back. Give your baby a convertible. But if we look a little deeper, it's all those cars that are insuring that one of these days it's never going to get cold enough to kill the first skeeter. How's that for a strange twist. That old Norse tree thing may end up contributing to a shopping spree that turns off the Gulf Stream and chills out Northern Europe to the temperature of Siberia. Meanwhile, the nearest beach to where I live will move some 100 miles inland, and we'll have to keep that ragtop rolled up just to keep our heads from mutating into carcinomic splendor. Some places spring won't leave; others it won't come back.

Maybe this year I'll have one extra splash to bring in '06. We might get some more intelligent folks into the Congress in '06, and who knows what might happen once that happens. Gawd knows the Republican winter has got to break soon, doesn't it? Happy Holidays.