Juan Cole suggests five obviously reasonable Congressional Hearings that might be undertaken as, among other things, a bracing contrast to the pointless and wasteful kangaroo court which has just given Mrs. Clinton a powerful boost towards her goal of achieving the Presidency. (Prior to watching some of the Clinton hearing on Thursday night I was having conversations with friends about how while I'd vote for Mrs. Clinton, I wished there were some other better choice. After her testimony was done it was clear to me that she had a solid grasp of what the United States government is, and will do a fine job in the office of the President of the United States. Thank you Mr. Gowdy, et al.)

But Mr. Cole is certainly right that all five of his suggested Congressional Investigations would be far more enlightening to the voting public than anything the Benghazi hearing was even theoretically capable of generating. What the Benghazi hearing revealed was, primarily, the incompetence of the Republicans in the House of Representatives. Of course we certainly knew that already. And it must be said that if one imagines the current House undertaking any of Mr. Cole's suggested quests for truth, they will mess those goals up just as much as the Benghazi hearings. Because in every case, as Mr. Cole well knows, the Republicans in Congress are already compromised by the subjects he suggests they investigate. Congress investigate Exxon, or ALEC? It's a thought experiment because it's easy to imagine the result of this group of "representatives" asking questions of those folks.

Here in North Carolina, the ALEC bunch has now "captured" the entire system of state universities, all sixteen branches of the University of North Carolina. The former Education Secretary of the George W. Bush administration is now the new President of the UNC System. She gets an annual salary of about three-quarters of a million dollars, a nice mansion in Chapel Hill, and a seven year contract. This lady has nothing beyond a bachelors degree. It's said she's a protege of Carl Rove, as NC is generally now a protege of Texas politics, a tragedy not to be wished even on Texas.

The UNC Board of Governors pulled this coup off with the style of safe crackers and jewel thieves. They got it done only a day or so before a new law would have at least forced them to offer some alternative choices. It was a lock, this appointment, the day they fired the capable current President--an act the Board had no explanation for. But as for the result, well the far right in North Carolina have made a move at least comparable to Governor Walker's destruction of the government worker labor unions in Wisconsin. This appointment, in its theoretical implications, is almost the assassination of liberal thinking in North Carolina. Jesse Helms, who is the godfather of North Carolina radical conservatism, and who hated UNC with a burning passion during all but his very last years on earth, must be dancing in his coffin. And among those who's dream it is to restructure Law in the United States, this amounts, in theory, to the capture of a grand old law school. If the cards fall as they may, one day a Supreme Court appointee could have a UNC law degree next to his name--a far cry from the dubious conservative law schools that already give formal credentials to the long-game of destroying every progressive advance in our legal framework which has occurred over nearly a century of at least modestly liberal governance.

There are certainly vigorous objections to this coup, from UNC faculty and students among others. I would expect any number of events to unfold as the months pass. Ms Spellings will not necessarily have a happy time in her mansion. And the Board that appointed her, now skulking off into the night, pretty much anonymous outlines in the mist, leaves her potentially twisting in the wind, to use a fine Nixonian phrase. This fine office used to be peopled with remarkable North Carolinians, William Friday being the first and foremost. Dr. Friday had degrees from both NC State and UNC. Before that he'd been in the Navy Reserve during World War II. It's a long way to a Carl Rove toady from Texas.

At the moment, the NC public thinks Ms Spellings is a political gambit by an 81/19 margin. How that might translate into actual votes next year is anyone's guess. A lot of those dubious voters are going to get to the poll and discover they don't have the proper credentials to cast a ballot. This is what a President of the University of North Carolina System used to look like:

https://en.wikipedia.org/wiki/William_C._Friday
Posted by Fiddlin Bill at 9:59 AM No comments:

Labels: The Book of Dylan


I'll be back soon. Last Friday we went up to see Libby's dad, and discovered he was very sick with what turned out to be pneumonia. The EMTs took him to the ER and we followed, and stayed with him till the early hours when he was admitted to the hospital. We got home about 2:30 AM. Next day we had a contra dance to play in Greenville, two hours to the east. We got home from that about 1:00 AM. The next day Libby had to go back to the hospital, and stayed in the room with her dad for nearly 24 hours, getting home Monday about 11:30 PM. By then I was sick with a cold, and she didn't feel good either. I'm still taking a handful of herbs and such, and dragging in to work. She was able to sleep almost all of yesterday (Tuesday), but she's still konked out and probably will go back to the hospital today for another round. Her dad is improving.

So, till I get the chance to think, you might want to read this:

There are many deeply disturbing features of the current rendition of the Republican Party. None could be much worse that its inability, at the highest levels of leadership, to admit plain truth and go from there. This characteristic has brought down many countries, including many during the past century. Part of "plain truth" is historical fact. Mr. Cole gets the basic historical facts correct.

Of the many obvious things "wrong" with Donald Trump, one thing he gets right is the basic historical framework which surrounds the event we call "9/11." It is little short of insane to deny these basic facts. When former leaders and leaders-in-waiting exercise this sort of "political denial," we should be warned.

As the EMTs rolled him onto the gurney, gramps complained. "Where are you taking me?" he said. "It's only a little cough." Gramps is 92 and suffers from a lot of things these days, including memory loss. What's the excuse for this:

Or for pathetic brother Jeb! to keep saying "...but he kept us safe." Hardly.
Posted by Fiddlin Bill at 7:42 AM No comments:

The Answer to Every Question is "More Guns" 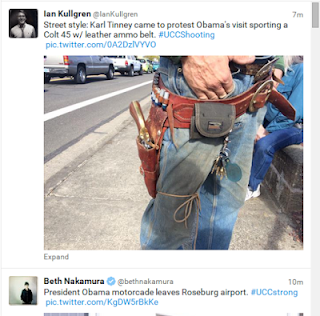 There were other shots in the post, of people with protest signs saying "Go Home Obama," and a confederate flag was also flown. Here's the link:

So it's not really that surprising that someone can post a fictional quote from George Washington, be refuted as a matter of actual history, and still be defended. Colbert's brilliant concept of truthiness thrives. It's not surprising because people who saw the actual blood can still summon up enough energy to go out and stand in a protest against what was in fact a Presidential visit of comfort, not politics. The denialists just scream louder. It's what they do. To the objection that Mr. Obama is "politicizing" the Oregon murders, that it is "too soon," he might well respond that he is just now politicizing the murders at Sandy Hook, because enough time has passed. "The thing that separates the American Christian from every other person on earth is the fact that he would rather die on his feet than live on his knees!" --George Washington. The poster adds, "Why do liberals find this so offensive?"

According to reports I read, the shootings at Northern Arizona University yesterday were the result of some sort of gun battle between two groups of students. That some survived is obviously an indication that more guns, bigger guns, more dangerous bullets, etc., are still needed. Sometime good guys have to fight it out with good guys.

There's a fine short story by Annie Proulx about some people who drive off from one watering hole to the next in a state of argument. It's in the book "Close Range." When the police find them, they're all dead. A gun fight had occurred. When the evidence is examined more closely it seems that one of the victims was shot from behind. Ms Proulx saw this coming some time back. A good defense lawyer could raise endless questions about noggin orientation, and how bullets can change direction in flight. At the inquest I mean. There's always some stuff to divide up amongst the inheritors.

When I was in the 5th Grade my principal brought a German Luger to class. He'd picked it up when he was marching into Germany, in 1945. He said people tossed weapons out of their windows, and this one landed at his feet, so he brought it home. We passed it around the class, from desk to desk. I don't recall anyone snapping the trigger, or pointing at a classmate, but mostly I recall the event as a whole, the story of the weapon's capture, the cold black steel and how it fit in the hand, even a kid's hand. Mr. Edwards had a blond crew cut and was probably in his mid-30s. I wish I knew what division he served in, as my father-in-law was also in that march in '45. Of course there were many marches, many moments.

Donald Trump this week called for the execution of Sgt. Bergdahl. He was cheered. Perhaps if he is elected, as his first Presidential Act (and the final conclusion to the experiment in American democracy, which has been on its death bed since at least the JFK assassination), Mr. Trump can actually shoot Sgt. Bergdahl in the back of the head on live teevee. That would be bracing to Trump's supporters. After that they can rise up and get on with the project of deporting 12 million undocumented people and their American citizen children. 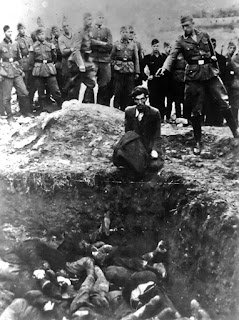 [photo from the Holocaust Museum, from 1942, Ukraine]

Posted by Fiddlin Bill at 9:14 AM No comments: