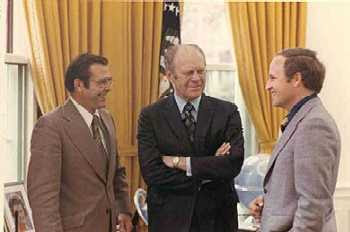 It’s a nice global-warming kinda New Year’s Eve morning here on the ranch, with a haze in the tree line and impending warm rain for the festivities of the coming evening. I’m barefooted, with no heat on in the house and none needed. After my morning jog through the blogs and news, some final thoughts for this guttering segment of our most “interesting” times.

As has been remarked, the picture of Saddam being prepared for his hanging by hooded men is a nearly exact parallel to the pictures of beheadings by hooded men we’ve seen since the Iraq War fell into its post invasion phase. As has been remarked, in a simple sense, the hanging of Saddam is our only clear accomplishment, unbungled*, unmitigated, just another execution. Of course it’s also been remarked that this route is littered with aspects of coverup and propaganda, like everything our current Administration attempts. There remain the ghost images, of Saddam as U.S. client, with Rumsfeld shaking his hand with U.S. chemical traces on his fingers, of the Bush I Ambassador’s assurances that, really, sure, Kuwait, noooo problemo. And there are the later images, fading like flesh rotting in the ground: starving children, crooked back-channel oil deals, out of date and missing WMD, the mystery of the banner on the air craft carrier: “Mission Accomplished.”

Some years back I watched, by accident, the execution of the Ceausescus on television. They were mad as wet hens when the men dragged them from their beds and out into their own back yard. They were shot dead still raging, and then became rumpled old rags hanging from their poles, faces slack, power vanished utterly. There was a certain clarity to it even if we’ve heard precious little of beautiful Romania since. Is Bucharest still sleeping on the Danube? How are things? Probably I’ll never have the chance to go back again; that strange concert trip will only come around once. (Bizarro update—after writing this I turned on NPR and discovered that Romania and Bulgaria are being admitted to the EU today!)

Shooting Saddam in his spider hole might have been somehow better. The fatal military assault on Uday and Xnay had at least the clarity of the riddled bodies and smoking shell holes. Summary justice is justice I believe, unless it turns out like Mystic River. One last quote from the peanut gallery: Sooo, Manuel, not feeling so bad about your 40 year sentence this morning?

When I was a kid I read lots and lots of War Comics, and listened to the news of Stalin and the myth of Hitler, and imagined that if some brave character could just go over there and shoot Uncle Joe, that would be so simple and clean and then we’ll all live in a happy better world. Instead history just unfolded as it did, and the closest we came to the ultimate abyss was perhaps the Cuban Missle Crisis, which I don’t think anyone just watching TV realized was nearly the end of the world as we knew it, the world that lead instead to Vietnam, to the assassinations, to Nixon and Watergate, to a modest, flawed glimpse in the Carter years of what a democracy might be like, before the oily surface closed back over and we returned to the universe of Republican Power. The most remarkable historical fact of this New Years Eve morning might be the talisman of Don Rumsfeld’s presence appearing and reappearing through the march of time—there he is with Nixon, and again with Jerry Ford (who gets a postal holiday on January 2 for some bizarre reason, and a second funeral—was he briefly born again?), and there Don is, now with Saddam, big smile, big glad hand, and now with his pals Cheney and Dubya, and, oh dear, Bush has fired him—but did he get to be one of the hooded lads adjusting the noose?

Who knows. Don, like Saddam and Uncle Joe, is ultimately just a man. The deeply creepy part is the question behind these people, and this never ending succession of mysterious events that substitute for something more constructive. The polar bears swim on until they drown, but it’s time for the next glittering “event,” we’ll get back to the polar bears later, when we have more time. Meanwhile, there is certainly the question of Diebold, and whether we actually get a vote, but I’m concerned that even when and if we manage to fix Diebold, far too many of us are far too in need of the kind of leadership that dismisses our concerns part and parcel with its assertion of power. It may come with the psychology we all live out, and that’s a pretty scary thought.

Consider that we all do start as children, dependent on adults, pretty much clueless as to what’s safe and what’s dangerous, learning the world to some degree with each bump and stumble. For nearly all of us, our first experience of leadership is authoritarian. This is true of our understanding of what being a leader is, as well. And one of the fundamental rules of parenting is to keep a united front. In a sense, Bill Clinton’s greatest mistake was to reveal that Presidents are actually just adults, with flaws and human failings just like all the rest of us. Beyond their usual craven pandering to power, the Republicans who tried to evict Clinton from office were surely afraid in their souls that government might be truly democratized by Clinton’s disregard of the façade of power. The laughable succession of Republican House leadership italicized the point to absurdity: anyone remember the Right Honorable Mr. Livingston, I presume? Surely his surprise when the trap door opened was nearly as great as Saddam’s, and lingers still. And the press pretty much agreed—whatever happens, do not show them the man behind the curtain.

Just as Carter was defeated by a collaboration between Iran and Reagan, so was Gore defeated by a collaboration of the press and the Republicans. Even the fundamental Separation of Powers was allowed to be winked at, just for a moment, to assure that the page be safely turned once again, and the country be set once again on the authoritarian path. Jerry Ford gets a postal holiday, and no one mentions his complicity in the slaughter of some 200 thousand East Timorese. Even the evidence—Ford and Rumsfeld in the same photograph—is ignored. Let there be holidays.

We, the people, have not developed a sense of adult responsibility strong enough to actually live in a democracy, that is, reality, for more than a few brief moments at a time. That’s what I see in the history of my lifetime. The press tells us only what we want to hear, like the boy who tells the girl he loves her as he slides his hand under her skirt, farther and farther up her thigh. Neal Cassidy wrote the book on this seduction, and he was only living in a world of bus stations and railroad tracks. He coulda been President! Because the fundamental truth is that we mostly want to live in denial, with a Leader. Our system produces “leaders” as incompetent and unthinking as George Bush because we don’t want a system that gives us power. George said “I am a War President,” and he thought that meant we would have to salute—and we did! We all believe we’re children—that’s our fundamental denial. And starting from that state of affairs, it is a fairly simple matter for those folks who understand how to lead flocks of deniers to keep the reins of power in hand. At least until we are really and truly in trouble.

Well, dang, New Year’s Eve again. Here’s the magic formula, so listen carefully: Nice I don’t need so much firewood, as I’m tired of the rattle of the saw, and I need to protect my hearing. Next summer there’ll be more ticks, and blue water to the pole. It’s a tradeoff, and somebody’s gonna make some money sailing those polar routes.

*Oops, wrong—the hanging was definitely bungled, because it was transformed into a lynching according to information available after this posting. Bush continues to bat .000
Posted by anna at 11:24 PM No comments: