If you go to Clifftop or Mt. Airy then you have seen or at least heard Bryan and Barbara Blake and their outrageous inappropriate kickass wailing joyous band, Unknown Tongues. Yes, they are the folks in the gypsy wagon with the huge yellow tarp covering the whole thing and the bottomless cauldron of incredible gumbo always with one more bowl at 3 AM, even if it’s a cold rainy Saturday night. Yes, they enter the band contest and get on stage with an accordion and a rubboard and some fiddles and guitars and a triangle and a second accordion and maybe even a @#!drum#!?! Oh how could they, and the judges shake their poor heads or grin and the crowd just loves them, and they get their $10 back and go back to the gumbo and fun. You know who they are. So they’ve made this really good CD now.

The CD is a mixture of what they do when they are playing gigs—some traditional cajun songs like “High Point” and “Cherokee Waltz,” some zydeco from the region of Boozoo and John Delafois, like “Zydeco Queen” and “Doghill,” a few original songs from Barbara’s pen: “Tongue and Groove” (co-written by my wife, Libby), “Madagascar”—a story about double-wides, NASCAR, and a naïve Madagascar lad who comes back to the states with his anthropologist apologist only to disappear into the bowels of Atlanta. They also include, in the way of zydeco, “Iko Iko” and “Ya Ya.”

I have to say right out that Libby and I played in Unknown Tongues for seven years. It was one of the high points of my musical life too. But as we don’t have anything at all to do with this recording and have been uninvolved in Tongues’ doings for a couple of years—Libby was completely surprised by the title cut and, well, royalties???? You must be kidding, right? Nonetheless, this is a terrific recording. Bryan’s accordion-playing and singing, together with Tom Parker’s great drumming, anchors the CD just as he does when they’re live at the Back Street in Beaufort. They get great guest work from Matt Haney on fiddle. He really spices up the cajun side with great traditional licks and turns and that sets Bryan up for the raunchy zydeco sawing he revels in. Barbara Blake is her usual songbird self on her vocals, ably backed up by Margie Misenheimer on some occasions. Bryan also contributes some fine pedal steel work. The steel is not always connected with Louisiana music, but just remember D.L. Maynard’s sound and you’ll place it fine. Todd Humphreys rocks the bass end on numbers like the double-clutched “Dog Hill.” The band also tosses in a couple of songs that are more regional to them than anything else: “Thirteen Miles to Merrimon” is a kind of blues written by Carteret County singer/songwriter Connie Mason; “Fish Factory,” a Blake & Blake composition, commemorates the menhaden factories of Beaufort.

My favorite cut on the whole CD might be “Grosse Erreur,” which captures the real dance hall sound you would find down in those little towns that run along US 90 between Lafayette and Lake Charles. It is not possible to do this stuff from a careful distance. Pick up one of these before they’re gone, and if you’re in the neighborhood, head down to the Gloucester Mardi Gras the Blakes throw for the community every February.

–Bill Hicks
Published in the Old Time Herald in 2004 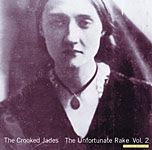 If you’ve read the basic info listings above you will have gathered that this fine old-time band from San Francisco (a place like Paris, where you don’t say “France” or “Freedomland” right after) is also an aggregation, a social circle, a conglomerate. Possibly even a religion: “thanks to all the Believers” closes the lovely booklet included in the package. Ain’t nothing wrong with that either—a “believer” by another word is surely a “fan,” and the old-time world is full of those praise be to Allah.

The Jades start off the CD with a rousing big-band setting of “Knoxville Rag”, a tune originating in the ‘20s recording by Taylor, Moore, and Burnett but being further refined by the ‘70s Lexington, VA old-time scene of Ace Weems and the Fat Meat Boys. The tune is nicely crooked as the Jades burn it, with all sorts of instruments sliding in and out and even a little get-quiet section in the middle (an arranging tactic they use off and on throughout the CD). They follow with a no-space cut to a haunting trio of “Shady Grove,” utilizing a baritone uke and Lisa and Stephanie’s fine vocal harmonies. Then comes the title cut, “Unfortunate Rake.” This song, essentially introduced by what precedes it, is a mix of traditional lyrics and original music by the band’s lyricist, Jeff Kazor, and it exemplifies what the Jades are aiming for, over all, in their music. “Rake” is in the long tradition shared by “Streets of Laredo” (or maybe vice versa), in this version with a female tragic heroine, dying of syphilis and mercury poisoning, mercury being the “cure” used in the good old-timey days of yore. It’s a vice-ful city song, a done-wrong song, and in its graphic details escapes the more romantic 19th Century parlor and cowboy traditions. A note reveals that one of the side effects of the old mercury cure was copius salivation—and this detail is lovingly rhymed into the chorus each time round: “my poor head is aching, my sad heart is breaking, my body salivatin’ and I’m bound to die…” The Kazor/Berman harmonies are haunting, and very modern in a rooted sort of way. The effect overall is this interesting mix of realistic tight focus detail that creates almost a surreal effect. The band makes attempts in other ways to focus on these tight vivid details—there are two Kazor originals, “Yellow Mercury No. 2” comes first, a coda to his tragic ballad about the Love Creek Flood of 1982, and then later, “Yellow Mercury No. 1,” a love-separated song which maybe refers yet again to the flood tragedy. In this song there’s a “yellow mercury sky.” The booklet also sports a small mysterious line below the title: “yellow mercury.”

I’m not proposing to decode all this, but only to note that such introspective details suggest an attention to the art of the whole. (I’m reminded of similar touches in Gillian Welch’s “Time the Revelator”—the dress the artist wears in a photo is mirrored in the design of the label, and lyric lines such as “the great emancipator took a bullet in the back of the head” float in an amazing, surreal way from song to song on her CD.) Kazor closes the CD with his “So Many People,” which drops “yellow mercury preacher” into a phrase. The tight focus is also caught in the instrumental musical details, most vividly in the use of mortar & pestle in “New Lost Mission Blues,” an original instrumental by Kazor and Lucas lamenting the “gentrification of the Mission District” of San Francisco. This listening experience is somehow what it might be like to lie paralyzed on a cot in some bamboo stockade in the Congo—riveting and yet somehow sinister and maddening too, sweat and paranoia. And then you have to add what the notes say—the tune is “about” gentrification. Gentrification! Really?? Bummer! Perhaps fortunately, programmatic music has always been a sort of silly idea—as an instrumental “Lost Mission Blues” stands quite on it’s own.

Maybe this gives you some idea of this fine CD. I want to stress that it’s a wonderful, artfully complete project, far and away better than almost anything you’re ever likely to hear on the radio. You will, of course, hear a cut or two on your local NPR affiliate’s roots show (let’s hope!). I am of the opinion that people who want to play “old-time” music in the world we live in have to come to grips with that essential, existential fact. We may love the simplicity of the fiddle and bow, the acoustic thrum of guitar and banjo, even the mortar and pestle and quill whistle, but we can’t just go back there to that simplicity, we can only utilize it here, in the ever present, where there are 8-year-olds carrying AK-47s in Kinshasa, heads rolling down the street in Tel Aviv, pretty widows strapped with explosives executed at close range in Moscow opera houses, Native-American single mothers who may get a mountain named after them in Arizona, but don’t come home to their babies. The Jades really get this in their own very individual way. I’m delighted that they’re making records and creating a following. This one will give you a lot of listening pleasure, and perhaps some discomfort too. This is as it should be.

–Bill Hicks (Note—Bill, like the Crooked Jades, is a Copper Creek recording artist.)
First published in the Old Time Herald