Heck of a job, Brownie

This is who Mr. Trump pardoned, while hiding behind the likely worst hurricane disaster to ever strike the United States.

Posted by Fiddlin Bill at 1:58 PM No comments:

We played a great house concert in a beautiful second-floor apartment located above one of the botiques that line that street mall in Charlottesville where the alt-right, white nationalist terrorist on Saturday drove his car into a crowd of pedestrians at about 50 mph, killed one and injuring many. We were there about three years ago. As the events unfolded I've found it hard to not stay riveted to the television. David Duke was up there.

Duke made a choice, many years ago. He's so desperate and needy, so limited in his notion of what his life might be, that he even came to where I live, little dying Siler City, NC, about two decades back. That visit was to try to start some sort of protest against the Mexicans and Central Americans who'd come here to work in the chicken processing plants. He found almost no support, and some opposition. The local guy who has wasted his life operating some sort of “white patriot” organization—when he's not pumping gas at his gas station—invited Duke. The visit came and went. A decade or so later the chicken processing companies for whatever reason decided to start moving their operations to other parts of the country and world. By then, many of the folks who came here to work had found somewhat better jobs, mostly small business things, or construction work. Their kids had gone to local schools, then college. The local high school had won a state championship in soccer. The saddest of the locals still dreamed of the return of the chicken plants, this time without the Mexicans. And Trump won the presidency.

Duke said on Saturday that it was his people, the Nazis and the Klan and the rest of them, the tiki-torch horde, that had won Trump his office. “We're taking the country back for him,” Duke said. The stormfront website thanked Trump for his laughable response to the Charlottesville murder. Trump on Saturday was as honest as he can manage, given that he has no sense of honesty at all and only views what he says as a means to some end or other. He was aiming at shifting the perspective to a general law and order one. He was hoping, and surely still hopes, to do some rounding up in the near future. The alt-right stooges are working to that end whether they know it or not, and Trump surely doesn't care if in the end he has to sacrifice a few of them to get at groups that continue to resist the drift into fascism and totalitarianism.

The Saturday statement was so at odds with the Charlottesville reality that it sank like a lead balloon. Finally Trump was actually forced, by his political counselors, to make some alterations in a second statement on Monday, the 14th. You could see his distaste for the effort. Some pundit said he looked like a hostage giving a staged press release. And he was. And he did not like it. When Mr. Trump doesn't like something, he immediately pouts and throws a tantrum. Before he could leave his own press conference he was not able to resist attacking the “fake news” press.

You couldn't write this any better, and in fact it might be critiqued as too unsubtle to be believable. The statement was supposed to be about a person who was murdered in a terrorist act perpetrated by a white nationalist. Before the ink was dry, the statement event was about Mr. Trump, and his continuing victimization by the so-called liberal press. The dead woman had vanished. Trump's apologists on the various news outlets were also hard at work reviving the both sides argument, and never mind that there was actual content at the center of the event: white nationalists and white supremacists and Nazis and the rest were there to start something, and people had decided that that sort of unAmerican sentiment was not going to be promulgated without some opposition.

The Republican party continues, mostly, to close ranks as soon as they can muster a bit of discretion. Senator Hatch's remarks were outstanding. “My brother died fighting the Nazis,” he said. A lot of people said that criticizing the Nazis was a political “no brainer.” It's just not where Mr. Trump lives. He believes he needs every Nazi vote to keep his base viable. And, judging by his record, he agrees pretty much with what the Nazis say. And then there's that transactional problem he has. There is film of him denouncing David Duke in 1999. In 2016 he'd never heard of Duke, and for months and months.

Nothing about Trump's beliefs and political positions should be a surprise at this point. If you're for him, you're for fascism and against American democracy. But it was rather poetic for Trump to be literally unable to convincingly say the words his handlers told him he had to say. He was quicker to denounce the black CEO who left his counsel of business leaders, by about 42 hours, and his denunciation was sharper. He still hasn't told David Duke and Richard Spencer to go fuck themselves. 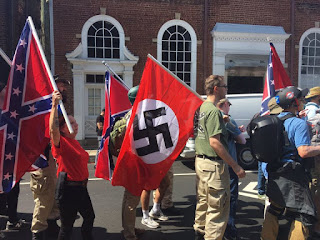 Posted by Fiddlin Bill at 11:09 AM No comments: