We played a gig the other night as a legendary NC ice storm impended. I left work early, packed up the mics and stands and the fiddle, drove over to the Blue Note, a little place on 15-501 across from what folks around here call the Green Weenie, atop a hill where once sat South Square Mall, which was some years ago pretty much entirely removed, tho there's still a parking lot and a lone office supply place down there in the vacancy. The Note serves good burger and que, and good craft beer, and sweet potato fries (you surely recognize the drift at this point), and they feature mostly solos and duets but have room for our little quartet. And so it was that we arrived amid beginning flurries, Mr. Craver and myself being the first two of us, and we brought in the mics and stands and Mike set up his piano, and it began to rain, with some of if freezing on the tree outside but still just rain on the warmer than freezing road and parking lot.

The best part was, all these folks came out to see us even with such weather afoot. I took that as some kind of testament, as I'll tell you the truth, if it was up to me I'd have cancelled on account of the weather and would not have gone out to see any band or event, or like Lee Triplett said once to Hedy West when she told him to sit down because he was upstaging the act presently at work in front of him at her very own festival in Pipe Stem, WV, "I wouldn't sit down if Jesus appeared." So fortunately for all, band and audience alike, I had no say in the decisions and simply soldiered through the blizzard and was present with the rest of us. (Our web person and her husband even drove down from Rocky Mount, Va, and they had to drive through snow for the better part of the trip home, after the gig, and whilst she attributes it to his being from Ohio and knowing how to drive in the stuff, still and all...)

So we had our complementary burgers and set to work. And during the second set Jim slotted a song I wrote aways back when, which we haven't done much since them days when we were young and it all seemed timeless and endless. We were planning to do "Play 'Rocky Top'" last summer, but since we hadn't practiced the new version with the fiddle part I worked up, I chickened out on stage and we did something I knew instead (which isn't a bad plan on stage, since mostly people are made embarrassed and queasy when someone has a train wreck on stage). This time I was sure of the business, however. And Bren, the web person, filmed the thing:

So there, you can see me and us'n turning out the old war-horse, and although you'll have to crank your computer speakers up a bit to hear all of it well, it's actually performed quite as I'd have wished in advance, and I'm hoping we'll do it again in upcoming shows.

And I wanted to point out to you a specific detail, which you will probably miss because of the relatively muddy sound of the room and the fact that of course there's no engineer or anything to diddle the knobs. In the third and penultimate verse, the, um, protagonist, who has posed throughout the ditty as what Shakespeare termed a "rude mechanical," as well as what someone else would probably call a horndawg, reveals his hidden complexity. Always, through the whole history of this song, the third verse started with the line: "well the money keeps getting smaller, and the rent keeps going up." Which I've always thought was a bit of remarkably acute observation coming from the lips of the otherwise rude mechanical, who is offering to trade an oil change for a song.

But lately, as we planned for this ice storm gig, I thought it might be even better to allow the grease jockey to actually cite the relevant economist who observed this deep truth back in the late 1920s. And thusly, if you listen real close, you'll hear me start the third verse with "Keynes says..."

And now you know the rest of the story. And for more coverage of the gig you can go to the web page:

Earlier, before the ice storm and even before the practice, someone sent me the following uncredited picture, which they'd found on a face book page which focused on photos from many of the Union Grove Fiddler's Conventions. The man playing is the great, even legendary you might say, fiddler Tommy Jarrell. The year is probably 1970, give or take a year either way. The young man studying Mr. Jarrell's left hand with some intensity is... me! And what you are observing, and indeed what I'm observing in this photo, is pretty close to the moment when Mr. Jarrell's incredible playing captured me, the very match which is in this moment lighting one of the fuses of my subsequent life. How bout that! 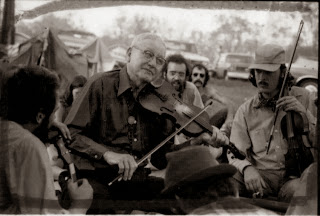